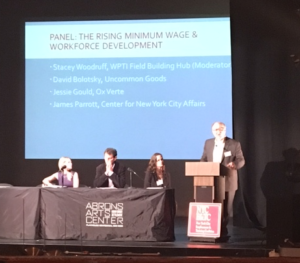 The minimum wage in New York City has been increasing, incrementally, from $8 per hour in 2014 to $15 per hour by December 31, 2018. Each increase presents opportunities and challenges for local businesses and for workers and jobseekers earning at or near the minimum wage.

The Workforce Field Building Hub, in collaboration with the New School Center for New York City Affairs and Hub Senior Fellow Dr. James Parrott, is releasing a series of briefs on the increasing minimum wage. Briefs draw upon economic research, local case studies, and examples from other localities. The first two briefs set the stage with current data on New York City’s economy—including a historically low unemployment rate and real wage increases—and an overview of the economic models used to predict the impact of the wage increases on businesses and workers. Early experiences with a $15 minimum wage in Seattle and San Francisco were highlighted in the third brief. The fourth brief documented the actions of local businesses in response to the changes. A subsequent brief will focus on potential impacts on the quality of jobs paying at or near the minimum wage, and a compilation of useful tools and resources for businesses, workforce providers, and workers as they navigate changes brought on by the increasing minimum wage.

Monitoring the Minimum Wage: How are Businesses and their Workforce Adapting? Sector Convening

Monitoring the Minimum Wage in the Press