WPTI Hosts Symposium with Stakeholders from the Construction and Manufacturing Sectors 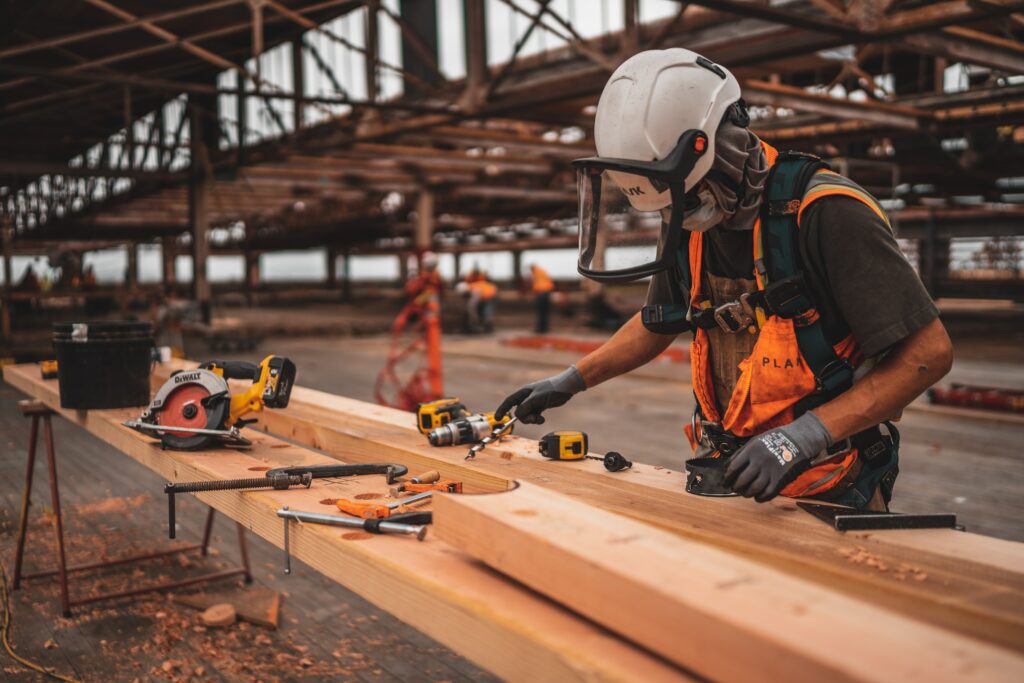 On Tuesday, March 16, Workforce Professionals Training Institute hosted the fifth and final session in our series of Employer Symposiums, presented in partnership with New York City Economic Development Corporation (NYCEDC). This session focused on both the construction and manufacturing sectors, and was attended by 70 workforce professionals, representing 44 organizations and agencies. We were joined by a wide range of stakeholders from both industries, primarily representing employers, but also workforce providers, trade associations, and more. Our speakers and panelists focused on the needs of the construction and manufacturing industries at a time when the job market is changing rapidly, and when technology is playing an increasing role across many sectors – just as the city begins to transition out of the pandemic and economic crisis.

Our conversation began with a presentation by Claudia Flores, Senior Vice President and Director of Opportunity M/W/DBE and HireNYC at NYCEDC, who spoke of the role of workforce development and career pathways at the center of NYCEDC’s economic development strategies. HireNYC is a New York City program designed to connect local jobseekers with opportunities at businesses with City contracts or that are part of City development projects. The program provides free recruitment and hiring assistance to these vendors and businesses, many of them construction companies, and requires them to consult with HireNYC and interview qualified candidates, in order to ensure pipelines for local workers. HireNYC also establishes targets related to hiring, retention, and advancement for permanent jobs, across multiple industries, created at City-supported development projects.

The construction and manufacturing sectors are often grouped together with regard to hiring, as well as economic development, but they are two distinct industries, with different histories and facing distinct economic challenges and circumstances. Construction in New York City has boomed in recent years, , with major residential and commercial projects occurring in all five boroughs, creating thousands of jobs. Meanwhile, the manufacturing sector has reduced its presence in the city over the past several decades, yet it still provides a greater number of family-sustaining jobs than many New Yorkers realize. Both industries were impacted by the COVID-19 pandemic and the resulting economic crisis, but not as severely as some other sectors, such as hospitality and retail.

Dr. James Parrott of the Center for New York City Affairs at the New School presented key labor market data on both sectors. He explained that both construction and manufacturing are key sources of blue-collar jobs in New York City, with a labor force that is heavily made up of immigrants – largely Latinx and male. Jobs in these sectors generally do not require a college degree. Construction is a relatively high-wage industry, especially relative to the education required, with a median annual salary of approximately $70,000. It involves both union and non-union jobs. Union jobs generally offer better pay and benefits than their non-union counterparts, but often require a longer and more challenging pathway to entry than non-union jobs, where workers can be hired and begin working almost immediately. In recent years, following critiques regarding the lack of racial and gender diversity in some building trades unions, the unions have been more intentional in working with pre-apprenticeship programs, and most notably, have significantly increased the presence of Black workers among their ranks. Currently, nearly two-thirds of NYC residents in apprenticeships are workers of color, and Black workers are more heavily represented among unionized construction workers than their non-union counterparts. In addition, the City of New York and the building trades unions recently negotiated a Community Hiring Agreement, wherein workers from high-poverty neighborhoods will be prioritized for apprenticeship programs.

Manufacturing in New York City is a much smaller sector than construction, significantly down from its peak earlier in the 20th century. At this point, it is largely dominated by smaller employers, manufacturing food, apparel, fabricated metal products, printing, electronics, and jewelry, Many entry-level jobs start at minimum wage, but there are opportunities for growth and advancement as one acquires skills.

Both sectors have seen declines in the wake of COVID-19, with construction jobs down 15 percent since January 2020 and manufacturing jobs down 20 percent. However, there are reasons to be optimistic. Construction has begun to see an uptick in commercial development projects, and given the Biden administration’s promise to invest in infrastructure, there may be major government-supported construction projects on the horizon. In the manufacturing sector, the workforce is largely older, and with many workers nearing retirement, there will likely be an increase in open positions.

For our conversation on the construction sector, we were joined by:

The conversation began with Donald Ranshte of the BTEA, who explained the hiring and career progression process for the unionized portion of the construction field. He explained that when one starts in the sector (on the union side), they are an apprentice, and are treated as a full-time employee. Once they complete the apprenticeship stage of their career, and have the requisite skill level, they become a journeyperson – a higher-paid position – and are hired through the union hall for individual projects, making construction different from many other industries, where a worker has one employer throughout the year, long-term.

She also discussed some of the key attributes for workers looking to enter a pre-apprenticeship program, including a high-school diploma or HSE, a level of comfort with math and reading, and personal qualities like timeliness, comfort with change, and ability to collaborate. These qualities were also mentioned by Glenn Hilzen of Building Skills New York, which places workers directly into non-union construction positions. He indicated that employers often look for communication skills and adaptability. He also discussed the importance of OSHA 30-Hour safety training, which is required for individuals who want to work on a construction site, as well as flagger and scaffolding training. David Dooley of Centrifugal Electric echoed many of these attributes, and discussed how his company, like many others in the sector, will provide ongoing skills training and career exposure to workers looking to acquire new skills and advance, if the workers demonstrate a commitment to doing so.

Chun Yee Yip of Lendlease discussed the impact of COVID-19 on hiring for construction projects, and she explained how Lendlease, and many other developers and employers, have shifted as many things as possible to a virtual format. They have also emphasized working with partners in the workforce field, and hosted more virtual workshops with partners and employers to build connections. Matthew Sarton of Triton Construction also spoke to the increasing digitization of the construction field, with the sector relying more on software and 3D modeling, and the increasing use of tablets and phones in the field. As a result, digital skills are increasingly important for construction workers and those looking to embark on construction careers.

For our second panel, we were joined by three employers in the manufacturing field:

Alisha Blechman of Catbird, a Brooklyn-based jewelry manufacturer, began our conversation. She spoke about how the manufacturing field contains a multitude of positions. For example, her company features jobs ranging from those actually manufacturing the jewelry to HR, operations, e-commerce, marketing, and more. This makes manufacturing an appealing sector for workforce providers, as they can place workers in different types of roles within one company.

Automation and digitization have significantly impacted the manufacturing sector, both before and during COVID-19. According to Doug Young of Leerform Fabrication and Design, which focuses more on custom fabrication, automation is more frequent at larger-scale manufacturers, while his company focuses more on unique pieces. Still, even companies doing custom work are incorporating new technology, and one of the qualities Leerform looks for in workers is an interest in learning new technologies and skills.

Frederick Bouchardy of Joya, a manufacturer of fragrances and candles, spoke about how companies interact with the workforce system, and what could help lead to more successful collaboration. He emphasized that many employers have little understanding of the workforce system and workforce providers, and need to have a better understanding of who they are and the types of roles they can help source. Without this understanding, they will continue to rely on hired recruiters, who have demonstrated success. As a result, the sector could be helpful in offering employers a resource that identifies key providers, and the roles they specialize in sourcing. At that point, workforce providers could build the relationships of trust and understanding with employers that are necessary to making effective placements that last.

Following the panels, discussions continued in breakout rooms, where the conversation largely turned to how workforce providers and employers can work together more effectively. On multiple occasions, employers indicated that they would like to work with the workforce development sector and workforce development providers, but want to be sure that these providers are sending candidates with the skills, professionalism, adaptability, and digital fluency needed to succeed. With private recruiters, they have an understanding that the recruiter’s sole interest is making a successful placement, while workforce development providers have multiple motivators, and may be more likely to take a chance on a candidate. Therefore, it may take more time to develop that level of trust. However, as companies are looking to hire more New Yorkers, and looking to engage with more underrepresented communities, they understand that workforce development organizations can be a valuable resource. They simply need to build those bridges, and those relationships, in order to begin this critical, collaborative work.

Symposiums like this one can serve as a valuable starting point, where workforce providers can not only develop a deeper understanding of employers, their needs, and their pain points, but also introduce themselves as a resource to address these needs. As employers shared contact information with the audience, it is incumbent on audience members to proactively reach out and engage, and learn more about how the jobseekers with whom they work could potentially be a fit for open positions and career pathways in construction or manufacturing.

This fifth employer symposium was the final session in our current series, but WPTI looks forward to offering additional events using a similar format, where workforce providers and professionals can engage with key stakeholders across various sectors in order to build the connections, and the understanding, necessary to implement and lead effective workforce programs. Stay tuned, in the coming weeks, for a full summary of the 2020-21 WPTI Employer Symposium Series, including key takeaways and next steps.